Will Sanatana Dharma (Hinduism) Helps You In Fighting With Corona 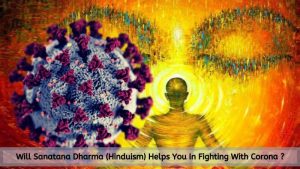 Will Sanatana Dharma (Hinduism) Helps You In Fighting With Corona
Know How The Ritual Of Sanatana Dharma Will Help You In Fighting The Corona Virus
Sanatan Dharma is the oldest faith of all religions in the world. The traditional Vedic religion in which God is worshiped in both real and formless structure. It is a faith based on the Vedas, which contains many special practices, beliefs, sects, and beautiful philosophies. It is the third largest religion in the world by number of followers, most of its worshipers are in India and Nepal. Though it is worshiped by many Gods and Goddesses, it is in fact a monotheistic religion. This faith is so vast in itself that different religions continue to come out of it from time to time, some old traditions continue to break and some new ones are joining, some old beliefs remain as they are and some beliefs are included in it. Found something, left something old, something remained old, so something new was added.
fighting with corona,
sanatana dharma,
corona virus,
beliefs,
corona,
virus,
sanatana,
hinduism,